Schultz was nominated by several members of the department who unanimously supported the award. Described as a dedicated student and pleasant worker, she represented the department at multiple conferences and was a role model to high school students.

Schultz said she was drawn to chemistry because of the many opportunities for practical application. At Cal Poly she worked with analytical chemistry for environmental regulation.

“I love the emphasis on Learn by Doing at Cal Poly. This has enabled me to have access to so many instruments and I feel so fortunate to be graduating college with all the experiences I've gained,” said Schultz.

Schultz’s success was made possible with hard work and the overwhelming support from her family, she says. She credits her parents for helping her develop a strong sense of resilience.

“They were always there to pick me up when I was down and taught me to always be positive, even when times are tough. This resilience has carried with me throughout college and has helped me be a student successful,” reflected Schultz.

Following her studies at Cal Poly, Schultz will continue her studies at the University of Rhode Island where she plans to earn a Ph.D. in analytical chemistry. 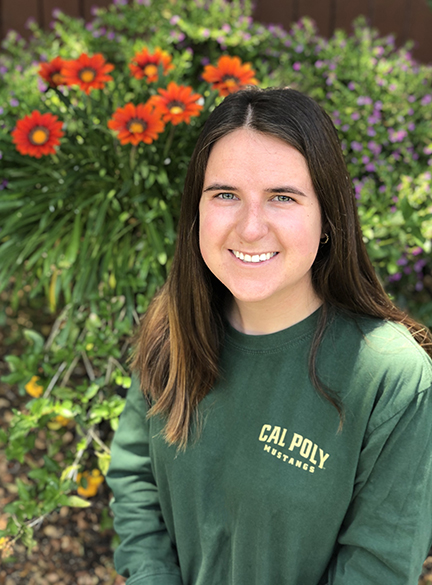 Panova credits her success to a few simple practices that have helped her carry the day: Commit to projects; break down objectives into manageable tasks; surround yourself with passionate and like-minded people; and always do your best.

“Pursue your curiosities, take risks, get started, and don’t be afraid to ask for help!,” says Panova. “It’s important to work hard and be persistent; it’s all about the journey and what you learn on the way, not just the destination.”

Panova enjoys chemistry because of the broad opportunities for application in industry.

“From household cleaners to rocket fuel to batteries in electric cars – we live surrounded by chemistry. It is fascinating to learn the science behind those things and apply fundamental concepts to better the products we use,” says Panova.

As the first in her family to graduate from a college in the United States, Panova’s achievements are a family milestone.

“It is a cornerstone that gives me a sturdy foundation to pursue an advanced degree and have a successful career. Graduating with a bachelor’s degree is just the beginning of my path towards future endeavors.”

Following graduating from Cal Poly, Panova will relocate to Redondo Beach, CA where she accepted a position as an analytical chemist with Northrop Grumman. She also plans to apply for master’s programs in Materials Engineering in the near future.

During her time at Cal Poly, Panova was awarded a Frost Scholarship.

Currently, water is desalinated by pushing it through an osmosis membrane, which requires a great deal of pressure and, therefore, a lot of energy. With California’s ongoing drought, this new technology could provide long-term relief for the Golden State and beyond. Although a strong El Nino is expected to bring much-needed rainfall to the state this year, experts predict it might not be enough to erase four record dry-years.

Zhang and a group of students are experimenting with integrating a layer of carbon nanotubes into a desalination membrane, which would change the way the water flows.

Because water flows through nanotubes much faster than it flows outside of them — up to a million times faster — the speed of the water moving through the tubes provides the necessary pressure. Large molecules, such as salt, are too big to fit into the tubes and so will not pass through the membrane.

“These new materials will reduce the cost of water purification and improve efficiency,” Zhang said.

The key to making the nanotubes filter water is to align them vertically. To achieve this, Zhang and his students have developed a liquid crystalline polymer that holds the nanotubes and serves as the desalination membrane. Through an interdisciplinary collaboration with Xiaoying Rong, a faculty member in Cal Poly’s Graphic Communication Department, the team then prints the liquid crystal onto a substrate, similar to the way ink is printed onto paper. Because of the printing method and the qualities of the polymer, the nanotubes align.

Zhang’s students have been involved in the real-world research project from day one. “Students make the materials, use advanced instruments, and print the film. They learn a lot of lab and problem-solving skills they can't learn from a textbook. Those are real skills for the future,” Zhang said.

“My research with Dr. Zhang gives me the freedom to approach problems without following a lab manual,” said Evan Scherzinger, who presented the research team’s findings at the Western Coatings Symposium in Las Vegas in fall 2015. “This ability makes me a much better chemist and prepares me for the challenges I'll face in industry.”

GALLERY: Bring Your Own Pumpkin Event

Dozens of students, staff and faculty members attended the annual Bring Your Own Pumpkin event Friday, Oct. 30, 2015 in front of the Baker Center.

The annual event is put on by the Cal Poly chapter of the coed chemistry fraternity Alpha Chi Sigma. 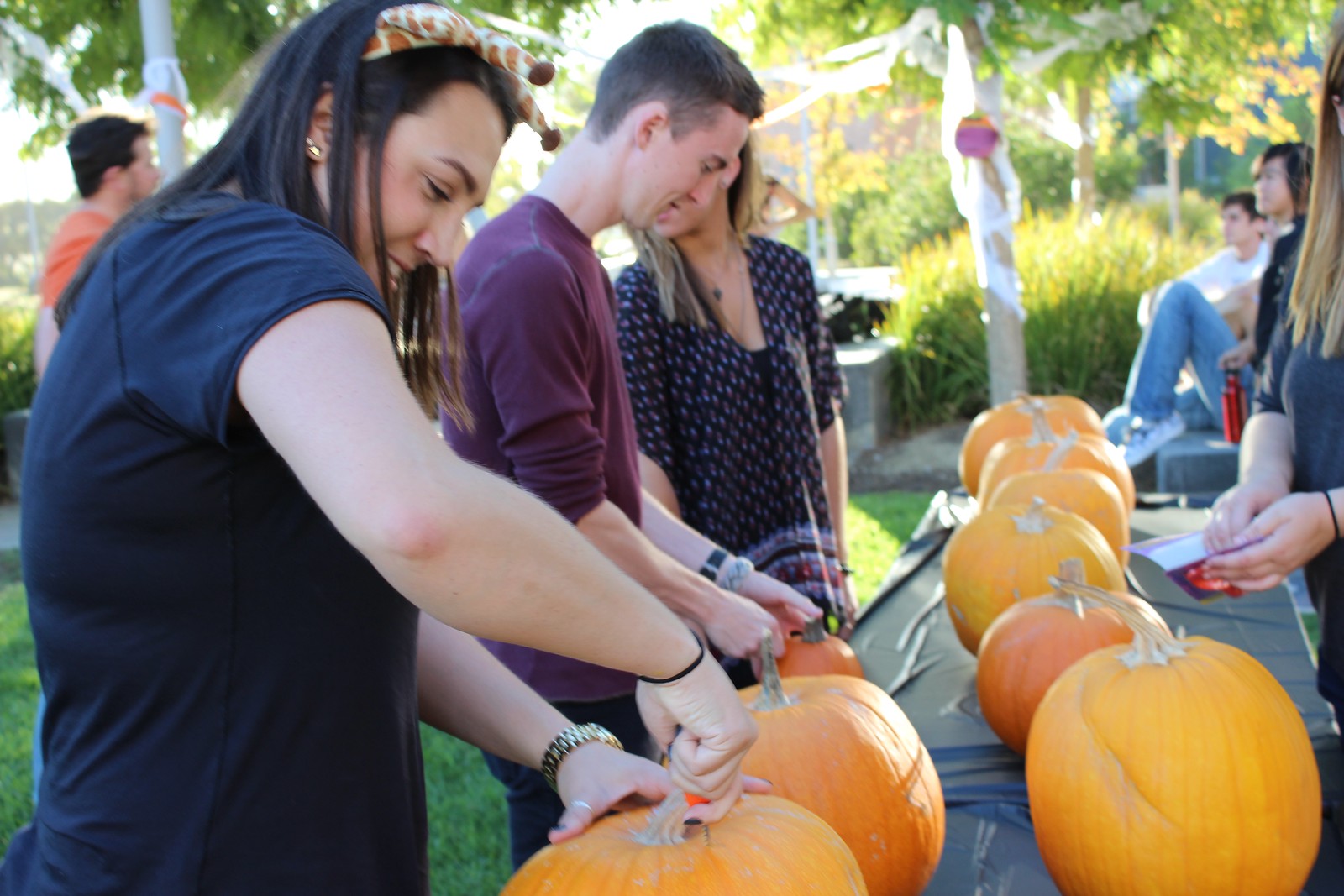 Forget the corn mazes. Pass on the pumpkin patch. Skip the haunted house. Instead, head to Centennial Lawn on Friday, Oct. 30 for the annual Bring Your Own Pumpkin event.

Cal Poly’s chapter of the coed chemistry fraternity Alpha Chi Sigma hosts the two-hour event, which begins at 5 p.m. between Buildings 180 and 52.

As the name suggests, participants are asked to bring a pumpkin to the event. Participants then carve the pumpkins and then watch as they are blown up in one of several chemistry demonstrations scheduled to take place.

There will also be a prize drawing, a pumpkin carving contest, a costume contest, and more.

Cal Poly honored two professors from the College of Science & Mathematics with the Distinguished Scholarship Award for 2014-15: Lars Tomanek in the Biological Sciences Department and Philip Costanzo in the Chemistry & Biochemistry Department. Wyatt Brown in the Horticulture & Crop Science Department also received the award.

Costanzo conducts wide-ranging research in the emerging field of polymers and nanomaterials. One of his major areas of focus is developing materials whose properties change when the configuration of the material's atoms changes. Various triggers, such as light or temperature, can cause a change in atomic configuration, which could, for example, erase scratches in paint.

All of Costanzo's numerous publications at Cal Poly have included student co-authors, many of whom have gone on to doctoral programs at top-tier universities. He has received more than $1 million in grant funding since his arrival in 2007.

Since coming to Cal Poly in 2005, Tomanek has been awarded $2.4 million in grant funding, much of it from the National Science Foundation (NSF). Many of Tomanek's 23 peer-reviewed papers include his undergraduate and graduate students as co-authors, and his students have led NSF-funded workshops for faculty from other universities. Tomanek is also a co-leader of the Environmental Effects on Coastal Organisms network of CSU researchers.

"Lars' work not only provided opportunities for other biology faculty to branch out into new directions using his proteomics approach but also gave our students the opportunity to do work more often performed by doctoral students and postdoctoral researchers at other universities," said Chris Kitts, chair of the Biological Sciences Department.

The Distinguished Scholarship Award was established in 2003 to recognize faculty achievements in research, creative work and other professional development activities. The award supports research and other creative endeavors and encourages the professional growth of Cal Poly faculty members.

Michael Abbott (B.S., Biochemistry, 1994) was the 2014 honored alumnus for the College of Science & Mathematics. As a vice president at Twitter, Abbott oversaw the growth of the engineering team from 80 to more than 350 engineers in less than 18 months. He and his team scaled Twitter's architecture to support hundreds of millions of daily tweets. Abbott joined venture capital firm Kleiner Perkins Caufield & Byers in 2011 and helps entrepreneurs in the social, mobile and cloud computing sectors rapidly scale teams and ventures. This talk is presented by the Chemistry & Biochemistry Department.

Continue reading From Cal Poly Biochem to Twitter and Beyond...

Anthony Overton (B.S. and Single Subject Credential, Chemistry, 2010) was named Paso Robles High School Teacher of the Year. Overton has been at Paso Robles High for five years. He teaches chemistry, AP chemistry and forensic science and is on the coaching staff for cross country and track and field. “Working in a teaching environment while at Cal Poly helped me to decide to become a teacher,” Overton said in an interview with the Paso Robles Daily News.

Read more about Overton in the Paso Robles Daily News

Cal Poly's chapter of the co-ed chemistry fraternity Alpha Chi Sigma was honored with the T. Dale Stewart award for best chapter nationwide for 2012-14. Given every two years, the award is based on the quantity and quality of events the chapter participates in and sponsors.

The students in the Cal Poly chapter host or help with a variety of events on campus and in the community. They provide free chemistry tutoring services on campus, help Boy Scouts earn their science merit badge, participate in community science nights, and assist local high schools with chemistry labs and experiments.

"These activities benefit the K-12 students by providing them with resources, and the Cal Poly undergraduates learn better ways to communicate science with the general community," said Phil Costanzo, a chemistry professor and the club's advisor.

The students also sponsor a campuswide BYOP (bring your own pumpkin) party every Halloween, during which they carefully carve and then blow up pumpkins.

"Alpha Chi Sigma is a great opportunity for students because it opens up a whole new community on campus," said Jennifer Dunaj, a chemistry major and the chapter's master alchemist, as the chapter leader is called. "You always see a friendly face in class and have someone to talk to."

"The students have worked hard for this award. They're a dedicated group and really enjoy sharing their love and passion of chemistry with others," said Costanzo.

Mike Abbott (B.S., Biochemistry, 1994) is this year's honored alumnus for the College of Science & Mathematics. Abbott joined venture capital firm Kleiner Perkins Caufield & Byers (KPCB) in 2011 and focuses on investments in the firm's digital practice. He helps entrepreneurs in the social, mobile and cloud computing sectors rapidly scale up teams and ventures. Abbott serves as a resource on enterprise infrastructure, cloud computing and big data. He also helps entrepreneurs recruit skilled talent in a hyper-competitive environment.

Abbott is not only an entrepreneur and investor but also a leader in engineering. He led the development of innovative, high-performance applications and services at Twitter, Palm and Microsoft before joining KPCB.

While vice president of engineering at Twitter, Abbott led the team that rebuilt and solidified Twitter's infrastructure and oversaw the growth of the engineering team from 80 to more than 350 engineers in less than 18 months. He and his team scaled Twitter's architecture to support hundreds of millions of daily tweets. Before joining Twitter, Abbott led the software development team at Palm that created HP/Palm's next-generation webOS platform and was the general manager at Microsoft for .NET online services, which became Azure.

Also an expert in big data businesses, Abbott founded Composite Software, a data virtualization software company that was acquired by Cisco, and co-founded Passenger Inc., which helps leading brands connect with their customers.

Abbott has advised and invested in numerous software companies throughout his career, including Cloudera, Hearsay Labs, Jawbone, Saynow, Reverb Technologies, Toytalk and Locu. He is a member of the Board of the USC Viterbi School of Engineering, and the PepsiCo Digital Advisory Board. He was also a member of the HealthCare.gov Tech Surge Team and remains an advisor to the U.S. Digital Service effort.